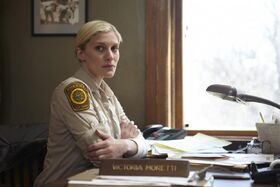 ACSD Deputy Sheriff Victoria "Vic" Moretti is one of the main characters on the Longmire television series. She is a former Homicide Detective from Philadelphia, PA.

In late 2011, she moved to Wyoming with her husband, gas company executive, Sean Keegan. Their relationship was unstable, and came to the point where Sean suspected her of having an affair with her boss, Sheriff Walt Longmire (with whom she is fiercely loyal to).

While in Philadelphia and prior to her marriage, Vic had an affair with her married superior officer, Ed Gorski. Vic broke up with him some time after. In 2011, Moretti was forced to leave town after she turned in Detective Gorski's partner, Bobby Dunwood. This led to Bobby committing suicide and Gorski swearing revenge on her.

In 2014, Vic and Sean were on vacation when they ended up abducted and assaulted by Chance Gilbert and his group of separatists. They were later rescued by Walt and Gorski. In the aftermath, Sean demanded that Vic turn in her notice that she was quitting. When she didn't, he had the Sheriff serve her with divorce papers.