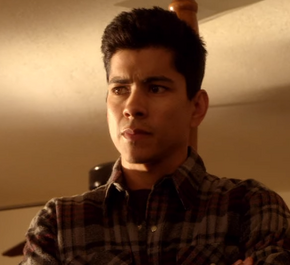 Vehoe Rounstone lives on the Cheyenne Reservation along with his mentally disabled sister Ayasha Roundstone and their grandmother.

Walt Longmire comes to question Vehoe after one of Ayasha's rapists turns up dead. He insists he had nothing to do with it and tells Walt that Ayasha is pregnant. He is later taken into custody after Paul Carter, one of his sister's rapists is found dead with the same symbol on his head as the one Vehoe spray painted on one of their cars.

Henry Standing Bear later visits Vehoe while he's being held and tells him not to say anything until he has a lawyer, much to Branch Connally's dismay.