Mingan Pine is a minor character in Longmire. 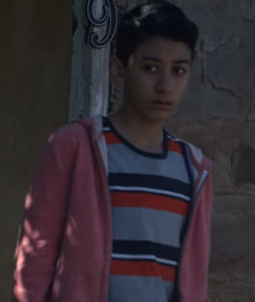 Mingan Pine is the son of Jim Pine. His father dies after a heroin overdose in 2016, leaving him a fourteen year old orphan.

Henry Standing Bear comforts him after his father is taken by an ambulance. Henry plans to adopt Mingan soon afterwards. He visits the boy after talking with Cady Longmire. Mingan is seen in his bed crying as Henry comes in. He is offered a Cheyenne medicine bag for strength as a gift. Henry tells him that everything will be okay, despite how bad it feels in the moment before telling Mingan to get dressed and eat something so Henry could take him to school and pulling him into a long embrace.

Mingan is later found by Mathias after his suicide. Mathias and Henry Standing Bear grieve over the young boy, distraught by his death. Mathias is later seen reciting what is assumed to be a prayer as they hold the boy in their arms for one last time.

Mingan is later seen in Henry Standing Bear's dehydration induced hallucination. He stands over the man and proceeds to give him the medicine bag that Henry gifted to him back, pressing it into his hand, then fades away.