"Okay, you got one minute to explain to me why I shouldn't shoot you."
―Marilyn Yarlott 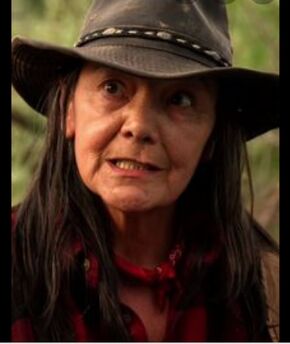 Marilyn Yarlott, or otherwise known as the Crow Medicine Woman, is a resident of the Crow Reservation.

She works as an outlaw, offering refuge and fake passports to people who need to get away. She helps Gabriella Langton after Henry Standing Bear leads her to Marilyn's camp. She later claims that Gab turned into a hawk and flew away.

She stumbles upon Henry Standing Bear when he's staked to the ground and gives him three medicine bags, telling him that the spirits will help him out of his predicament. She later leads Walt Longmire to where she last saw Henry.

Marilyn visits Walt Longmire with a tempting offer: to take him to Malachi Strand. She compares Malachi to a Japanese bark beetle spreading, killing everything.

Malachi and his hoods have been hiding out on the Crow Reservation. At first, she had a profitable arrangement selling them deer and elk—until Malachi compared the bullets that killed his men to a slug he found in an elk, which proved she saved Henry Standing Bear. With her camp burned to the ground, she’s hiding out from Malachi and is now willing to lead Longmire to eradicate the invasive species.

She guides him onto the Crow Reservation and is shot. Longmire returns fire, killing the lone security watching that section of the perimeter. The sheriff transports Marilyn to the hospital where she dies from her injuries.