"A lot of bad things happen to a lot of women out here. At least my daughter had the good luck to be raped by a White guy."
―Linda Langton 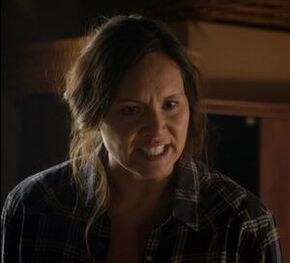 Linda was shown berating May Stillwater for reporting Gab's rape to Walt Longmire, stating that it was none of her business. She was combative with Longmire and company during her first encounter with them, and after learning that Gab was at Four Arrows Casino, Linda berated her daughter as well; expressing anger for spending money at the casino and not paying her rent, while showing little to no regard for Gab's emotional state. After Gab went missing and was kidnapped by her rapists, Linda accused Longmire of causing Gab to run off in shame.

Linda's self-serving heel persona was shown in full form after Longmire found and rescued Gab. Longmire returned to the Langton home with Moretti and Cady, and during the meeting, Cady explained to Linda that a federal prosecutor is going through with a case against Gab's attackers. Linda responded that there won't be a case, as Gab wasn't pressing charges; while also again accusing Longmire of causing Gab to be abducted. She later stated that she didn't need justice, just for her rent to be paid, and it was that statement that revealed that Linda was bribed to not press charges. Linda received months back rent and a new phone for her silence regarding her daughter's rape, and following the reveal, she stated that she has her own brand of "justice," while Longmire and company have theirs. She also stated that she was taught to keep quiet, and she delivered that same mentality to Gab, before mockingly thanking Longmire for helping Gab finally learn.