"Did you know that the U.S. Government only quantifies three things by blood? Dogs, horses, and Indians."
―Jacob Nighthorse 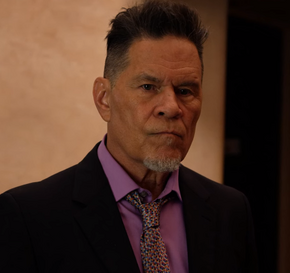 Jacob Nighthorse is the owner of a lot of businesses including the Four Arrows Casino in Longmire (TV series). He is active member of the Cheyenne Reservation Tribal Committee, despite the fact that he barely meets the bloods requirement to be considered Cheyenne.

Jacob Nighthorse has a distaste for Walt Longmire after he becomes one of Walt’s obsessions, first accusing him of killing his wife, Martha Longmire, and then later Branch, which led him to blaming Nighthorse for a bunch of little things. Not to mention, Nighthorse is constantly harassed by Walt under the speculation that he oversees fraud, prostitution and drug dealing out of his casino (another reason for Walt to accuse him, since he and his wife campaigned against the construction of Four Arrows. Jacob is later accused of working with the Irish mob, which disguised itself as Manifest Destinations lead by Shane Muldoon, who was working with Malachi Strand, and ran out of his casino without Nighthorse's knowledge.

Despite this, Nighthorse helped Walt’s daughter Cady become a legal aid for the Cheyenne tribe by funding her work, and Henry, Walt’s best friend, get his bar back. Also in a surprising move, he provided vital evidence to help exonerate Walt in his civil trial.

In 2011, Nighthorse can be seen attending a sweat with Henry Standing Bear and Walt Longmire.