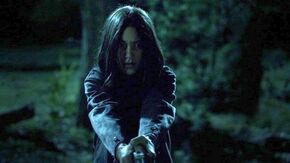 Gabriella Langton is a young girl that lives on the Cheyenne Reservation.

Gab and her neighbor, May Stillwater, come to the the Absaroka County Sheriff's Department to report that she had been raped. However, it happened on the Cheyenne Reservation, so Walt Longmire has to contact the Cheyenne Reservation Tribal Police chief, Mathias. The investigation comes to a stalemate until Walt suggests they cross-deputize each other.

Cady Longmire takes interest in the case, encouraging them to contact a federal prosecutor so that Gab can get the justice she very well deserves. Gab's mother, Linda Langton, doesn't seem to take to the gesture very well, insisting that she wont get any justice.

Later, the Absaroka County Sheriff's Department had been notified that Gab had went missing. Walt Longmire among investigating Newitt Energy's employees' belongings finds her locked in a storage facility container bound to a chair. '

She gets frequent visits from Henry Standing Bear, who comes to check on her. While her mother is out for a week, he visits and insists that she write a note to Hector asking for her assailant's to get the punishment they deserve. She protests, explaining that she doesn't want to leave the house, but Henry offers to take the note to Hector's wall himself. In her note to hector she explains that the assailants told her to scream as loud as she wanted because no one cared enough to listen.

Later, she and Henry Standing Bear, who is disguised as Hector, attack Tyler Malone (one of Gab's rapists). She shoots Tyler and Henry insists they get out of the area. After walking for a few seconds, she tells Henry that she had dropped the gun at the scene. He returns to get the gun and gets shot by Walt Longmire in the process. They get into Henry's truck and drive until Henry starts to pass out and they have to pull over. Discovering that the man was shot, Gab encourages them to get him to a hospital. Henry opposes and removes the slug from his leg with her help. They abandon Henry's truck off the side of the road. Gab leads them to a friend's house, Mandy Plitt, and threatens to report her boyfriend for rape if Mandy doesn't allow her to use her car. The next day they drive to the Crow Reservation to meet a medicine woman (Marilyn Yarlott). They have to walk from the entrance forward and eventually get to a river. When Henry finds out that Gab can't swim, he carries her across. They arrive and shots are fired, Henry states why they are on the Crow reservation and is promptly knocked out. Marilyn leads Gab to her camp and asks Henry to leave after he wakes up.

Walt Longmire has a map drawn by Henry Standing Bear to lead him to Marilyn's camp, fearing that Gab is in danger and being tracked down by Walker Browning. He tries to lead her off the reservation when approached by Walker and his men. From an unknown source, gunshots take down Browning's men and Gab disappears. When Walt asks what happened, Marilyn states that Gab became her true form, a hawk, and flew away.