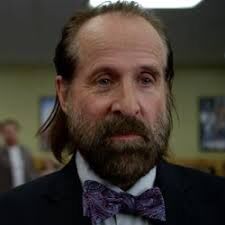 Chance Gilbert is a resident of Durant, Wyoming. He first appears when Vic Moretti and her husband Sean Keegan's car breaks down and they are in search of a phone. Once in the house, Gilbert harasses them about Walt Longmire and proceeds to hold them hostage and physically torture them.

He tells Vic and Sean about his self lead party of separatists that he started after fleeing from a fascist country.

Chance Gilbert is taken to prison later and put on death row.