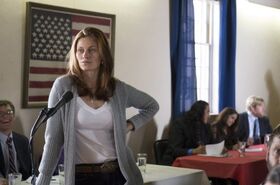 Cady Longmire is a female character in the Longmire television show.  She is the daughter of Walt Longmire, and on-and-off-again lover of Branch Connally. She is portrayed by Cassidy Freeman.

Cady is the only child of Sheriff Walt Longmire. She is a licensed attorney, and believes her mother, Martha, died from cancer.

She is a graduate of University of Wyoming College of Law (Wyoming's only law school).

Cady lost her job at the law firm after learning that her mother was murdered in Denver, rather than of cancer. She found work at the Red Pony, the bar owned by her father's best friend, her godfather, Henry Standing Bear.

In 2013, she was critically injured in a hit-and-run accident.

In 2014, Henry was arrested. During Henry's trial, Cady served as his public defender.

In 2016, Cady Longmire is funded and employed under Jacob Nighthorse, who voices that she could be a great help to the Cheyenne Reservation working as a legal aid. With the help of Henry Standing Bear, she purchases a foreclosed house on the Rez to use as her office.

Cady helps a Cheyenne woman named Asha Wright place a restraining order against her husband. After Asha and Mandy Plitt get into a fight, Mandy discovers that Asha's husband J.P. Wright is abusing her. Cady houses her at her office until J.P. breaks in, armed, and Cady shoots him out of self defense. Mathias and the Cheyenne Reservation Tribal Police take the girls at the scene into the station. Asha turns on Cady after J.P. is shot and tries to kill her when the hospital informs them that he passed away during surgery. Mathias is unable to charge Cady in an act of self defense and allows her father to take her home.

In 2017, Cady Longmire alongside Catori Long, a teacher at Red Water Elementary, submit an appeal with the help of Jacob Nighthorse. Cady explains to the Cheyenne Reservation Tribal Committee that Tate Dawson, a sixth grade student of Long, needed medical attention that his family would not agree to give him. The Governor asks if the Dawson family knew that they were making an appeal for the temporary custody of Tate to which Cady tells him no. Jacob Nighthorse then asks Cady if she is 100% certain that the child will die. She argues that they couldn't be certain that he would or wouldn't die, that they don't get to decide. Nighthorse then voices his disapproval of taking Tate from his home and speaks about how he and many others were taken from their homes as children by white outsiders who thought they were unsafe. The committee agrees and they oppose the appeal unanimously.