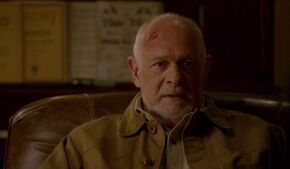 Barlow Connally is a resident of Durant, Wyoming and the father of Branch Connally. He is one of the wealthiest men in Absaroka County and owns the Connally Estate.

Barlow seems to drink a lot, mostly expensive alcohol, and even gets into a small car crash upon his first appearance.

Barlow murders his son Branch Connally after he confronted his father about his and Jacob Nighthorse's meetings. He then moved Branch's body and set it up as a suicide, but when he moved the bullet shell, it took important evidence from the crime scene, leading to him being caught.

Barlow was found to be the one to give Miller Beck the order to kill Martha Longmire in attempt to get Walt Longmire's land. After telling all of this to Walt, he kills himself on Walt's cabin steps.