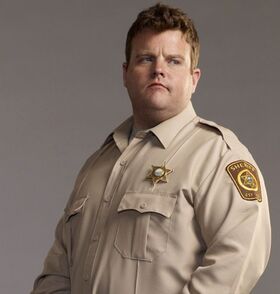 ACSD Deputy Sheriff Ferguson, best known as The Ferg is one of the main characters on the Longmire television series.

Young and inexperienced, Ferg was hired by Sheriff Walt Longmire as a favor to Ferg's father.

He has a crush on Cady Longmire. While investigating Cady's hit-and-run accident, Ferg held his gun on a suspect until he was talked down by Deputy Vic Moretti.

As a deputy sheriff, Ferg drives a 1979 Pontiac Firebird Trans Am and later a 2016 Dodge Charger, and carries a Smith and Wesson Model 29 in .44 Magnum as his duty weapon.